I am moving old blogs across from nvireuk before I close it next month so that I don’t lose them. Here is another. Please don’t take it from this one that I am in favour of wind turbines. I most certainly am not, but if we must use wind power to appease renewable fans, then at least we should do it in ways that are less irritating to humans and wildlife and a little imagination can go a long way with today’s technology compared to the primitive, almost Victorian heavy engineering used for conventional turbines. This method should be a lot quieter, less visually intrusive, about the same efficiency but unlike wind turbines, potentially able to reduce in cost with Moore’s Law. Initial cost would be similar (the costings I mention are based just on their sample prices, which obviously are usually far higher than finished large scale production), so still nowhere near as good as using shale gas, but it could be. Even then, we’d still need backup generation for when the wind isn’t blowing.

Conventional wind energy harvesting uses turbines on a grand scale, connected to a central motor. The whole thing needs heavy engineering, complex control systems and expensive and scarce materials such as neodymium for the motors. It is possible to build a system that is far more elegant, resource-efficient and less intrusive. Perhaps even much cheaper. 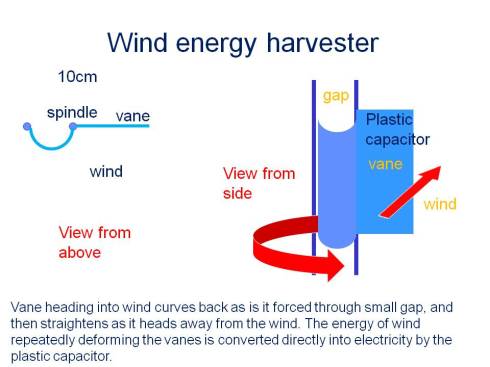 Some time ago a Danish company Danfoss, invented plastic capacitors, that generate electrical energy directly when they are bent. Wind pressure could be used to bend small vanes made of this material by pushing it around a spindle. As it rotates, one side goes through extended, the other side is forced to bend on the way back through the gap. By repeated bending and extending every time it rotates, each vane would generate electricity from the wind. These could be arranged in long strings, and many strings made up into a large sail.

The sail would be tethered to an anchor using ropes, and when the wind blows, it would fill up, the vanes would rotate, and energy would be harvested, with no need for a central motor or any heavy engineering. When the wind dies down, the sail would collapse so that it is less visible. Because the vanes individually would be small, just 5-10 centimetres across, no motion would be visible from any distance away, so they would not be as distracting as conventional turbines. Nor would they kill birds. Plastic capacitor sail generators would therefore have a few advantages over conventional approaches.

The disadvantage is that at the moment the material is fairly expensive, but there are excellent prospects for large cost reductions, and these could make it a far cheaper, as well as a greener, way of harvesting wind power.