Futurist memories: The leisure society and the black box economy

Things don’t always change as fast as we think. This is a piece I wrote in 1994 looking forward to a fully automated ‘black box economy, a fly-by-wire society. Not much I’d change if I were writing it new today. Here: 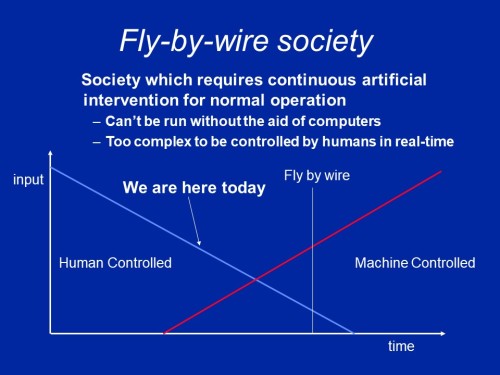 The black box economy is a strictly theoretical possibility, but may result where machines gradually take over more and more roles until the whole economy is run by machines, with everything automated. People could be gradually displaced by intelligent systems, robots and automated machinery. If this were to proceed to the ultimate conclusion, we could have a system with the same or even greater output as the original society, but with no people involved. The manufacturing process could thus become a ‘black box’. Such a system would be so machine controlled that humans would not easily be able to pick up the pieces if it crashed – they would simply not understand how it works, or could not control it. It would be a fly-by-wire society.

The human effort could be reduced to simple requests. When you want a new television, a robot might come and collect the old one, recycling the materials and bringing you a new one. Since no people need be involved and the whole automated system could be entirely self-maintaining and self-sufficient there need be no costs. This concept may be equally applicable in other sectors, such as services and information – ultimately producing more leisure time.

Although such a system is theoretically possible – energy is free in principle, and resources are ultimately a function of energy availability – it is unlikely to go quite this far. We may go some way along this road, but there will always be some jobs that we don’t want to automate, so some people may still work. Certainly, far fewer people would need to work in such a system, and other people could spend their time in more enjoyable pursuits, or in voluntary work. This could be the leisure economy we were promised long ago. Just because futurists predicted it long ago and it hasn’t happened yet does not mean it never will. Some people would consider it Utopian, while others possibly a nightmare, it’s just a matter of taste.

4 responses to “Futurist memories: The leisure society and the black box economy”