Two years ago I wrote a blog on future hosiery where I very briefly mentioned the idea of using folded graphene as synthetic muscles:

Although I’ve since mentioned it to dozens of journalists, none have picked up on it, so now that soft robotics and artificial muscles are in the news, I guess it’s about time I wrote it up myself, before someone else claims the idea. I don’t want to see an MIT article about how they have just invented it.

The above pic gives the general idea. Graphene comes in insulating or conductive forms, so it will be possible to make sheets covered with tiny conducting graphene electromagnet coils that can be switched individually to either polarity and generate strong magnetic forces that pull or push as required. That makes it ideal for a synthetic muscle, given the potential scale. With 1.5nm-thick layers that could be anything from sub-micron up to metres wide, this will allow thin fibres and yarns to make muscles or shape change fabrics all the way up to springs or cherry-picker style platforms, using many such structures. Current can be switched on and off or reversed very rapidly, to make continuous forces or vibrations, with frequency response depending on application – engineering can use whatever scales are needed. Natural muscles are limited to 250Hz, but graphene synthetic muscles should be able to go to MHz.

Uses vary from high-rise rescue, through construction and maintenance, to space launch. Since the forces are entirely electromagnetic, they could be switched very rapidly to respond to any buckling, offering high stabilisation. 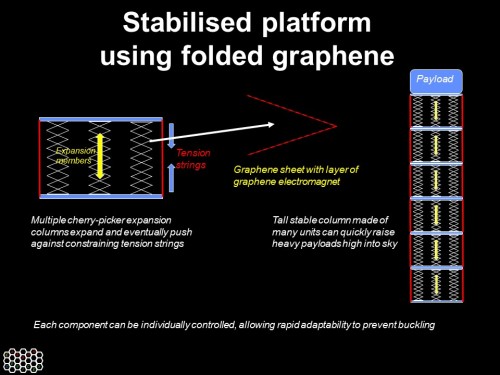 The extreme difference in dimensions between folded and opened state mean that an extremely thin force mat made up of many of these cherry-picker structures could be made to fill almost any space and apply force to it. One application that springs to mind is rescues, such as after earthquakes have caused buildings to collapse. A sheet could quickly apply pressure to prize apart pieces of rubble regardless of size and orientation. It could alternatively be used for systems for rescuing people from tall buildings, fracking or many other applications. 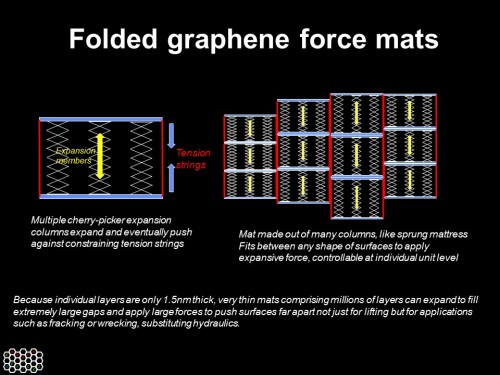 It would be possible to make large membranes for a wide variety of purposes that can change shape and thickness at any point, very rapidly.

One such use is a ‘jellyfish’, complete with stinging cells that could travel around in even very thin atmospheres all by itself. Upper surfaces could harvest solar power to power compression waves that create thrust. This offers use for space exploration on other planets, but also has uses on Earth of course, from surveillance and power generation, through missile defense systems or self-positioning parachutes that may be used for my other invention, the Pythagoras Sling. That allows a totally rocket-free space launch capability with rapid re-use.

Also particularly suited to space exploration o other planets or moons, is the worm, often cited for such purposes. This could easily be constructed using folded graphene, and again for rescue or military use, could come with assorted tools or lethal weapons built in.

A larger scale cherry-picker style build could make ejector seats, elevation platforms or winches, either pushing or pulling a payload – each has its merits for particular types of application.  Expansion or contraction could be extremely rapid.

An extreme form for space launch is the zip-winch, below. With many layers just 1.5nm thick, expanding to 20cm for each such layer, a 1000km winch cable could accelerate a payload rapidly as it compresses to just 7.5mm thick!

Very many more configurations and uses are feasible of course, this blog just gives a few ideas. I’ll finish with a highlight I didn’t have time to draw up yet: small particles could be made housing a short length of folded graphene. Since individual magnets can be addressed and controlled, that enables magnetic powders with particles that can change both their shape and the magnetism of individual coils. Precision magnetic fields is one application, shape changing magnets another. The most exciting though is that this allows a whole new engineering field, mixing hydraulics with precision magnetics and shape changing. The powder can even create its own chambers, pistons, pumps and so on. Electromagnetic thrusters for ships are already out there, and those same thrust mechanisms could be used to manipulate powder particles too, but this allows for completely dry hydraulics, with particles that can individually behave actively or  passively.