Long ago, in the 1980s, there was a TV series called Blake’s Seven. It was conspicuously low budget but there were some pretty good ideas in it. The best for me was a perspex computer called Orac, which was a key member of the crew. It was very smart, and had a wonderful talent of being able to communicate with pretty much any other computer and get information to assist he crew.

As you can see from the photo, there wasn’t a lot of information about exactly how Orac was meant to work, but that makes it all the more stimulating for an engineer.  Looking at it, I got the impression that it probably used some sort of optical computing, and have been very keen watching that progress ever since. I have had three ideas stimulated by Orac. The first was a design for an optical switch based on it architecture, which I called Optical Router And Controller in its honour. (That was so long ago I can’t open the file with the picture in it but it looked a little bit like Orac too, with radiating tubes going into a spherical photonic crystal core, the idea being that you could dynamically create a reflecting surface in the core to deflect the incoming beam out through any of the other tubes). The second idea was the idea of gel computing and the third was for an evolving quantum computer using entangled particles to connect to others far away. The third is the most interesting but is of dubious short term feasibility, so I will look at gel computing in this entry.

Modern computers use chips with multiple cores, typically 2 or 4 in a laptop or PC. The number is increasing, and optical interconnects could help to make wiring easier. 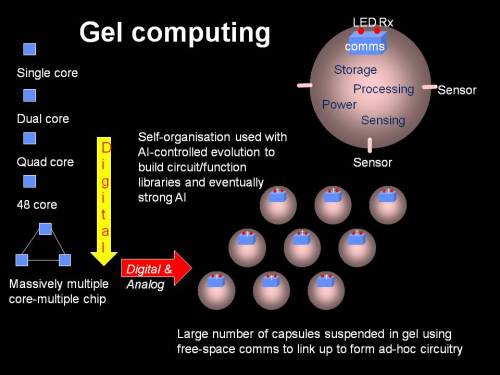 But imagine using thousands of cores (as are already common in supercomputers). With ongoing miniaturisation, it will be possible to make fairly cheap computers with many thousands of cores suspends in gel, communicating with each other via free-space interconnects using beams with thousands or millions of wavelengths. The gel would help cool the processors but more importantly, it would enable full use of the third dimension, greatly increasing the number of processors that a computer could use. So you might buy a computer with a small pot of gel (maybe yogurt pot sized) as the main processor.

It will be fairly easy to use such an architecture to make evolvable computers, with dynamic linkages between processors or clusters. But just having processors suspended would miss the big opportunity. It would be far better to use this as an opportunity to integrate sensing and storage more closely with processing, much as the brain does. And since I think the main purpose of gel computing will be in AI, this really should be done as early as possible.

The diagram shows how this might work. Small capsules could contain processing, sensing, storage and communications capability. Of course some means of acquiring energy is needed too. This could be optical, thermal, electrical or even chemical. Some of the capsules would contain digital circuits, some would contain analog ones, some a mixture. Dynamic optical links between capsules allows them to be arranged into a wide variety of architectures. These could be experimental, using evolutionary techniques to develop sophisticated and compact solutions to problems, such as the best technique to control a motorised sensor to gather real world data. A processing gel could try out enormous numbers of architectures and algorithms to try to accomplish a range of simple tasks, quickly building up a library of tools and appropriate circuits for each. It could then use the simple functions as raw material to build more complex ones, adapting them as it goes also using evolutionary techniques. So, it might learn how to use simple sensory inputs from a camera or microphone to acquire useful knowledge from the outside world. It could similarly learn to control external attachments such as limbs or muscles. Having accomplished simple sensing and activation, it could progress to learning logic, maths, deductive reasoning and so on, trying techniques all by itself, and testing its results against verified data until it arrives at useful set of thinking tools. It would gradually learn to think. Humans could of course put potential solutions into it, which it would use as starting points in its experimentation, and on which it would quickly improve. And by turning some of its sensors internally to monitor its own thinking and sensory interpretation processes, it could achieve consciousness. A self-configuring gel processor is in my view the best bet for achieving machine consciousness this decade.

This idea is now quite old; I have written and lectured about it many times, but I am excited because it is now getting very close to real feasibility. The optics is coming quickly, evolutionary and self organisation techniques are maturing a bit. We are gaining better insights into how biological neural networks function, and of course these insights could be fed into such evolvable processors as starting points and suggestion. The sheer number crunching potential would allow the gel to run through trillions of mutations to find circuits and algorithms that work well.

Later, progress in synthetic biology will enable circuits to be incorporated in or even fabricated by bacteria, and the gel computer concept would progress nicely, all the way to smart yogurt.

I’ve done some of the basic calculations, taking into account processor density, component sizes, signal propagation speed, line of sight visibility constraints and so on. To cut a long paragraph very short, it will ultimately be possible to make a smart gel or yogurt with the same overall intelligence as Europe has today with all the human minds combined. Bring it on.

This entry was posted in AI, communications, Computing, Futurology, IT, technology, Uncategorized. Bookmark the permalink.