Generation Z have only recently started getting media headlines as their first members reach adulthood, and a few journos are starting to talk about generation Alpha, still young kids now. But this a futures blog. What about the generation after alpha? Generation Beta? No of course not. Nobody wants to be beta. The alphas got lucky, but betas won’t want to be labelled second class to their predecessors.  So they won’t be called Beta. We think that Generation Bee is appropriate and we’ll explain why. It has a nice ring to it, and still fits the alphabetic naming sequence that began with Gen X.

Nobody ever remembers the exact dates of the various generations, and they aren’t written in titanium anyway; different sources differ. But here is a nice helpful chart from CMglee on Wikipedia showing the vague boundaries: 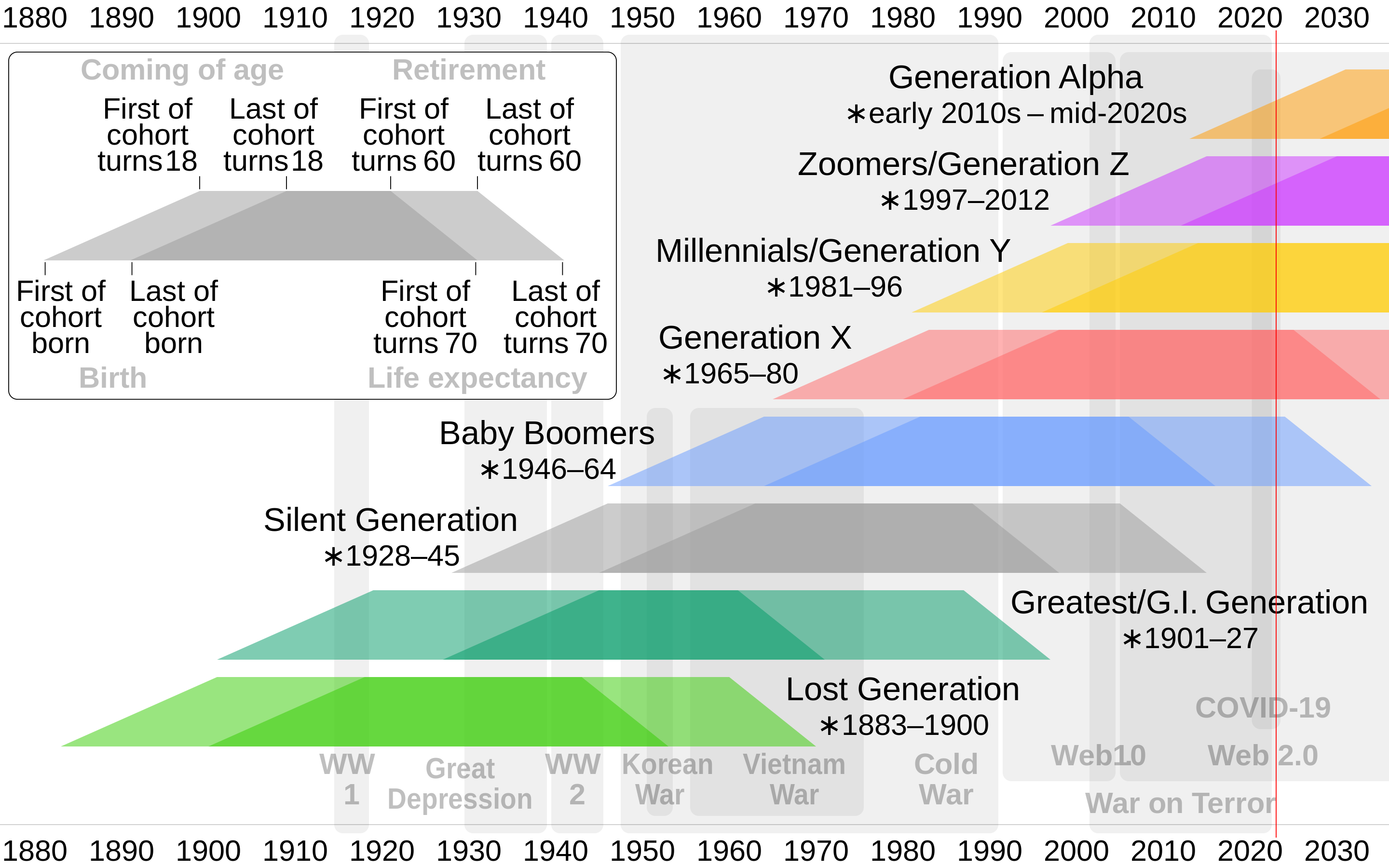 The Alphas are already here, some 6 or 7 years old now. COVID might define much of their lives, interfering so much with their education and their teens, suffering the consequences of social distancing damaging their emotional development, huge debts and high unemployment, holding back many of their parents, dampening leisure opportunities. By the time they reach adulthood, we’ll have had over a decade of recovery so although much debt will remain, the worst will be history.

The Bees will start around 2028, give or take a year, and will run through to around 2044 if we take the typical 16 year generation duration, so Generation See should start in 2045. That’s a very convenient late marker because 2045 is when a lot of futurists such as me think we’ll start getting early direct brain links that increase our IQ, sensory capability, memory, and give us the first experiences of sharing minds and thoughts with other people telepathically. We might think of that next generation as the first transhumanists, with a higher ability to understand things hidden to their entire human ancestry. We’ll preemptively call that 2045-2061 generation Generation See, appropriate to their superhuman senses and capabilities offered by their bio-enhanced & hybrid AI brains, staying with the C alphabetic successor.

So, back to generation Bee then. What will characterize them? Not quite superhuman yet, though with a few minor IT-enabled brain enhancements and smart drugs improving capabilities during their development. Some will have limited genetic modification, mainly having disease-related genes edited away, but possibly some positive enhancements that have been shown safe, and some that were picked from a multiple choice of embryos with different genes.

It’s possible that the Bees will be the first to make Mars their home, or at least visit in a meaningful way. They will be nomads by nature, like Gen X. Feeling somewhat alien in their home environment, never settling and pretty ambivalent about where home IS, they will be happy to wander anywhere in the hope of making their fortune, including space. Unlike their Zoomer parents who were conspicuously equality activists, Bees will be out to make the best of themselves, and to do their best for themselves. We might think of the exploration of space as a new gold rush.

In political and economics terms, they will have spent their childhood suffering the self-inflicted austerity of their Zoomer parents, their sanctimonious puritanism, their socialism, their defeatist degrowth and seeming determination to carry on living in unnecessary poverty long after the economy could have recovered so as not to make too much environmental impact. The Bees won’t experience any global warming and will wonder why, they won’t see any need for economy in a thriving world full of resources and high technology that allows things to be made with barely any environmental impact. Their Gen X and Millennial Grandparents will remember how they were as kids, spoiled rotten with loads of toys and computer games and they will be spoiling their grand-kids just as every generation of grandparent does. This will contrast heavily with the attitudes and behaviors of their Zoomer parents and will make the Bees determined to shed the austerity and grab back a life of plenty. The Bees will be rebels, they will want to return to prosperity. They will reject green dogma, reject the idea that they need to lead lives of austerity when the world can easily offer all they want and more. They will have a renewed work ethic, rebelling against a socialist world, demanding profits for their efforts, and will make a highly enthusiastic return to capitalism. They will have renewed enthusiasm for acquiring both things and experiences. They will become as busy as bees.

Having grown up in a thoroughly networked world accustomed to mature social networks, they will work together across distances instinctively, unlike the Alphas whose social networking went through generations of failed experimental legislation in futile attempts to curb political interference. By the time the Bees enter their teen years, augmented reality will be mature, and so will AI, operating at human-like levels across broad fields. Their friends and AI friends and partners will be there with them all the time. They will share realities, navigate city overlays, have their own secret signage and symbology, use multiple role avatars to denote functions. They will work cooperatively like bees, address new markets as intuitively and effectively as bees discovering a field of just-opened flowers. They will have their own information system, build new ideas and construct cellular organisations that other generations can’t even see. They will think together as effectively as a hive mind, because they’ll be so closely interwoven and connected they will essentially be a hive mind. Bees is a very appropriate name indeed. But it goes still further. When they face opposition or resistance, they will be more able to join in attacking their target than any previous generation. Their cyber-armory will be instant and a strong deterrent, as painful as a bee sting.

Having been brought up in this multiverse, where there is no single reality, no one real world, with many alternative real and virtual worlds competing for attention and immersion, their explorative mindset will spur them on to treat space as just another virtual frontier.

They will have been born after the crisis that we are going through now -the health, economic, political and societal crisis – so they will hear stories of ‘lockdown’ and ‘killing granny’ as if they are folklore and will perceive it historically as a collective madness and cult-like behaviour. Seeing this obvious widespread human liability to such failings, they will want to draw new boundaries between themselves and others – just for their own protection.

Technology development may well make it safe to take psycho-active drugs that today are dangerous. Bees will develop new legal frameworks for drug taking and hallucinogenics, which will be seen as just another type of experience that can lead to greater individual expression and personal and functional improvement. They might do their very best work under the influence.

Some of these drugs will work with trans-cranial magnetic stimulation (TMS) or even be carried in micro-capsules that allow their release to be controlled electronically via networks, enabling synchronization of drug release in a large group. Some capsules may also have capability to electronically stimulate nerves or brain regions, creating pleasure both chemically and electronically.

One thing’s for sure, the Bees will throw the best parties the world has ever seen.

Bronwyn Williams is a futurist, economist and trend analyst, who consults to business and government leaders on how to understand the world we live in today and change the world’s trajectory for tomorrow. She is also a regular media commentator on African socio-economic affairs. For more, visit http://whatthefuturenow.com

Dr Pearson has been a full time futurologist for 29 years, tracking and predicting developments across a wide range of technology, business, society, politics and the environment. Semi-retired and has relinquished four former professional fellowships, but still a Fellow of the World Academy of Art and Science and life member of the British Computer Society.

This entry was posted in Uncategorized. Bookmark the permalink.