Solar farms should be placed in desert regions that have low value for growing food, and relatively low value to nature. There are plans to install a massive solar farm in nice green Kent, where it is occasionally a little bit sunny. That strikes me as lunacy, and even some green groups agree and are campaigning against it.

The project is apparently being led by Hive Energy and Wirsol. I have been in contact with Tesla, who say “Tesla is not in conversations with any parties with regards to this project”.

Land is limited and we must use it sensibly

Nature often takes a battering when money is available, but a rich country should protect nature and ensure that some appropriate spaces are set aside. It is right to resist attempts to reassign such land to other purposes, especially when there area obvious alternatives. In this case, the land in question is mainly natural habitat, but other green areas are used for food production.

World population is growing, with another 3 billion mouths to feed mid-century. Agricultural technology will improve output per hectare and food trends may reduce the amount of meat consumption, but we should be able to feed everyone just fine even with 10 or 11 Billion people, but it will require good land stewardship. Prime agricultural land should be used mainly to grow crops. Some will be needed for buildings and roads of course, and we will want to have extensive nature reserves too. When we can produce more food than people need, we can return land to nature, but we should certainly not waste it by using it for solar farms when there are far better places to put them.

Secondly, the main current argument for solar power is to save CO2 emissions. If you read my blogs regularly, you’ll know I think that claims of human-related CO2-induced global warming catastrophe are greatly exaggerated, but there is some effect so we should not be complacent, and we do still need to be careful with emission levels. I’ve always been in favor of moving to solar and fusion as very long-term solutions. Fusion won’t be a big player until the 2040s. One day, solar will be cheaper than using shale gas, the most environmentally friendly fossil fuel solution with only half the CO2 output for a unit of energy compared to oil and coal, but that day is still far in the future. The more energy a panel can make, the more CO2 it saves. We only have one atmosphere, and a ton saved anywhere is a ton saved globally. It makes sense to put them in places where there is a lot of sun. Often that means deserts, which obviously have very little value for growing crops and support relatively low levels of life for the same reason. Putting a panel in a desert produces far more energy for far less environmental cost. A solar panel in the Sahara would make 5 times more energy than one in Kent, without reducing world food output at all. 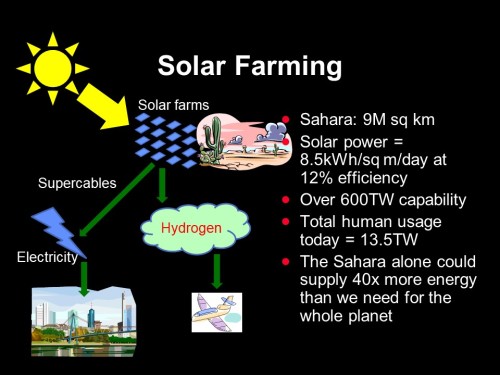 Furthermore, many desert areas are home to poor people, who might welcome extra income from housing and maintaining panels for a cut of the revenue they make. Dust and sand would make maintenance a regular issue, but providing decent income for regular work for people with few other options makes good economic sense. Doing so would also help subsidize other infrastructure badly needed that might also improve local quality of life in those areas.

Finally, by providing extra income to deprived areas of the world, geo-political tensions may reduce somewhat.

All in, it makes far more sense socially, economically, politically, and environmentally to provide solar power from desert areas than from prime agricultural land or natural habitat.