Warning: some or all of what you will read here might be nonsense, but hey, faint heart ne’er won fair maid.

Lockheed Martin are in the news with yet another claim of a fusion breakthrough. It looks exciting, but some physicists are already claiming that it won’t work. I haven’t done the sums so I don’t have a sensible opinion on it. I am filing it mentally with all the other frequently claimed breakthroughs and will wait and see, not holding my breath. I really hope they succeed though. If they don’t, then their claim is just hot air, and if they can do that, then why can’t I? So here is how I would do the easy bits of the top level design, leaving the hard sums to others.

Joint European Torus = JET, and the new Lockheed Martin approach is meant to be about the same size as a jet engine. I couldn’t help making the obvious mental leap. Long ago, plane engines used internal combustion engines and propellers. The along came 40-year-old Frank Whittle and changed the world with his jet engine invention: 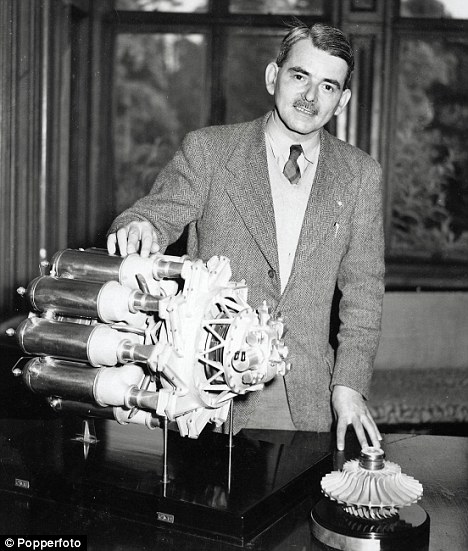 Standing on his (and Rutherford’s) shoulders, I had to ask whether we can’t use a jet engine arrangement to harness fusion. We don’t need the propulsion, just the ejected products to extract heat from, fairly conventionally. As lazy as researchers can be these days, I typed ‘jet engine fusion’ into google images. Way down the page was one that I thought had already used the idea, as a spaceship propulsion system, but bringing up the page, it doesn’t, it just uses a pretty conventional reaction chamber and ejects the fusion products out through a nozzle to provide propulsion force.

So either the idea is so obviously flawed that nobody has even bothered to investigate it far enough to bother making graphics, or a major case of group-think has affected the entire physicist community. Bit of a gamble proceeding then, but, if you have a few billion to gamble, here’s how to do fusion: 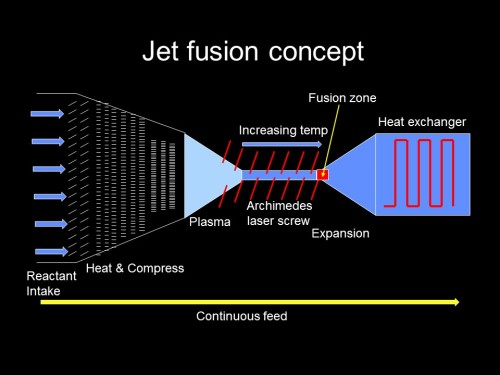 Intake a continuous stream of deuterium and tritium. Note for those people who want to believe everyone except them is a moron: I am not actually a moron, I have a Physics degree and specialised in the nuclear options. I do know you only need a tiny quantity of material. The pic shows a jet engine but it is the compression stage idea I want, not the scale, so the compressor would obviously look nothing like this, the diagram is just to get the point across that the jet engine principle is a good one.

Compress it (using some of the energy from the fusion process)  and optionally heat  or compress it conventionally to reduce energy deficit in final stage.

Feed it into the narrow reaction pathway, which is a strongly confined tunnel surrounded by an Archimedes screw of high intensity lasers.

Generate continuous heating via lasers as the plasma passes along the reaction pathway (using some of the energy from the process) until fusion finally occurs in the short fusion zone.

Allow hot fused products to expand in an expansion chamber

Pass through suitable heat exchanger to make steam/molted sodium or whatever takes your fancy.

Feed some of the energy harvested to drive compressors, heaters, and obviously the lasers. Very possibly some of the products might be useful feedstock for production of lasing medium.

OK, the intake and compression bits are quite jet enginy, and using some of the energy produced to power the earlier stages is very jet enginy. We don’t have any burning of gases so it isn’t quite the same. But in the interests of extracting as much from Whittle as possible, I kept it nice and circular with as few components as possible in the way, arranging the lasers in a continuous spiral (inspired by the Archimedes screw), so that the plasma heats up as it passes through them until it starts to fuse. There is no actual screw, its just that if all the lasers are mounted and directed towards the plasma jet as it heats, the external arrangement would look very similar, and the effect would be that the temperature and proximity to fusing would rise as the plasma passes through it.  You still need serious magnetic confinement to prevent the plasma touching the walls, but there is nothing physical in the path to touch, just magnetic fields and lots of laser beam.

I can’t see any immediate reasons why it couldn’t work, and it offers some definite advantages over a torus approach or exploding pellets. It takes ideas from all the other approaches so it isn’t really new, just a rearrangement.