Food production is adapting to increased environmental awareness, but we will see far more change over coming years. 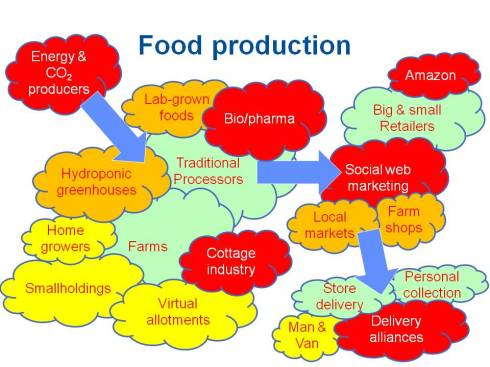 There is a lot of innovation right now in food production. Hydroponics is growing, as are vertical farms, home growing and focus on local production that is encouraging cottage industry specialists. There are some nice synergies. Greenhouses can make good use of waste heat from power stations and also benefit from the CO2 given off if they burn fossil fuels, which of course is locked up when the plants convert it to biomass. This effectively increases the energy efficiency of the power station by adding an extra layer of chemical energy recovery after thermal. There are many articles already out there about hydroponics etc so I don’t need to repeat them here. That’s what Google is for.

The web makes it easy for producers of all kinds to have a closer relationship with customers, so it is now possible to organise local marketing and distribution around social networking, with groups of customers even commissioning crops grown according to specific regimes. GPS-enabled tractors can treat each square metre of a field effectively as a different managed allotment. With people more interested in exactly how their food is produced, this is sure to find a healthy market as the economy recovers.

At higher levels, financial strain during the lengthy recession is forcing many people to commercialise their hobbies, such as baking or catering, creating a growing home-made sector. This will even extend into arts ad crafts thanks to new technology such as 3D printing, which will make its way into the kitchen any time soon.  So the emerging pattern is one of rapidly increasing diversity in food production, from crop growing to processed foods manufacture. This creates opportunities for increased competition in the food space, but also presents risks to existing manufacturers. As ever with any kind of turbulence, the winners and losers will be decided by how willing and able companies are to adapt.

Vertical farms on the walls of tall buildings add agricultural space to cities and as well as growing food, also helps air quality. The food would be of dubious taste and value if air were polluted as badly as it used to be, but with emissions now, it is probably OK. A variety of mechanisms have been suggests for vertical farms. Some look more feasible than others, but the general idea seems workable, and experimentation and development will sort out which solutions work best. One thing that is easy to forget though is that the amount of sunlight incident on a given land area doesn’t depend on the building architecture raised on it, and using a wall gives a lower energy density than a field or a roof because the same total light is spread over a larger area. Interior farms of course need artificial light, but if that is produced via nuclear energy, then it might still work out well environmentally.

Home finishing is a good prospect too. Many people are already used to part bake products, where they buy a product that is already mostly prepared and just needs finishing off in the oven to make one with all the benefits of freshly made cuisine. Microwave and other ready-meals are even more familiar. 3D printing technology may even have a future role, making edible frills and accessories to brighten up appearance.

Home finishing could be done as a small local business too. Large manufacturers could gain local presence for fresh produce by using local finishers, and these could be ordinary households or based in small offices or shops, making a new cottage industry. They could also work well with local manufacturing and distribution companies. Social networks could provide most of the platform for these local business clouds but they could also be based on systems run by large companies.

This social potential is useful if people rebel against the multinationals at some point. With frequent problem areas like tax avoidance, misleading information, exploitation and other issues that are setting people against them, having a fall-back position increases leverage by showing that communities are not powerless.

Current biotechnology research into lab-grown meat might eventually flourish into a large meat manufacturing industry. It is hard to tell yet how successful it might be in creating cost effective, healthy and palatable solutions. Vegetarian meats would presumably see a good market since many vegetarians avoid meat mainly because of the ways animals are reared and treated, and many meat eaters also have some reservations and would be willing to switch. Lab-grown meat would be little different from a yoghurt in terms of its cruelty implications. Although the principle has been proven, much work is need to replicate textures and taste well at a reasonable cost.

Lab-grown meat could be more energy efficient than that produced by animals, and would liberate farmland for crops. Together with increasing productivity in crop production anyway, some expect that we will be able to start returning land to nature in the second half of this century because we will make plenty of food for everyone with less land.

Biotech will create new varieties of crops, some with extra vitamin content or other health benefits, lower fat animals and enable varieties that are adapted to a wider range of climates, thereby increasing the amount of land that could be used for agriculture.

Home printer technology also is being hyped for food production, or rather assembly is probably a more accurate description, since nobody is yet suggesting its use for making the raw materials such as proteins and carbohydrates.  Its is effectively the next level up in abstraction from the lab grown products. Even chocolate could be made using printers. Food printers could only ever be a niche market, but could sit alongside other home gadgets such as microwaves and mixers. Cakes, confectionery,  frills and accessories would be the probable markets. It would especially appeal to the kinds of people who make elaborate cake decorations and could extend creative food design to a much broader group.

Food technology will continue to other areas too, making more appealing products from even wider range of raw materials. GM bacteria or algae could compete well with land grown crops. Algae may be grown at sea as part of carbon reduction schemes anyway, and could be used for either biofuel or as a component for food production. Of course, many foods contain lots of ingredients, so even if it isn’t suitable as a main platform, such humble starting points may be a used as fillers or other additives.

Of course, fish farming is bound to increase too. Many fish species are threatened today and near extinction of a key species does eventually force governments to listen and act. Although regulation so far has at best been poor, it can only improve and perhaps we may soon have a global set of treaties that ensure sustainable fishing and farming. There will also be a place for GM fish that maybe grow faster or breed faster. Some countries will be more willing to accept GM than others but when the choice is high prices v GM, GM will win out.