I had a new idea. If I was adventurous or an entrepreneur, I’d develop it, but I’m not, so I won’t. But you can, before Apple patents it. Or maybe they already have.

Many people own various brands of pads, but they are generally expensive, heavy, fragile and need far too much charging. That’s because they try to be high powered computers. Even e-book readers have too much functionality for some display purposes and that creates extra expense. I believe there is a large market for more casual displays that are cheap enough to throw around at all sorts of tasks that don’t need anything other than the ability to change and hold a display.

Several years ago, Texas Instruments invented memory spots, that let people add multimedia to everyday objects. The spots could hold a short video for example, and be stuck on any everyday object. 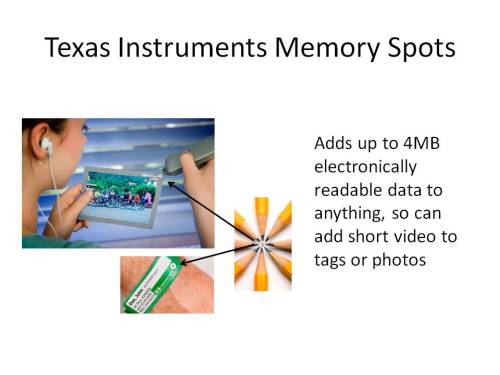 These were a good idea, but one of very many good ideas competing for attention by development engineers. Other companies have also had similar ideas. However, turning the idea around, spots like this could be used to hold data for a  display, and could be programmed by a similar pen-like device or even a finger touch. Up to 2Mb/s can be transmitted through the skin surface. 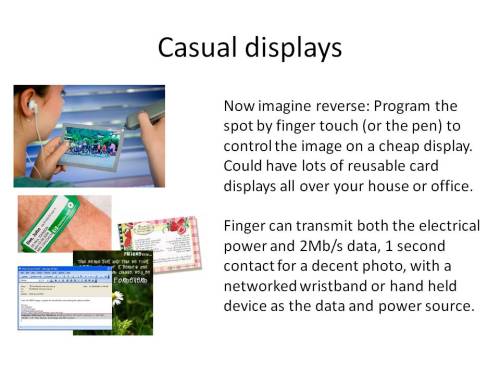 Cheap displays that have little additional functionality could be made cheaply and use low power. If they are cheap enough, less than ten pounds say, they could be used for many everyday purposes where cards or paper are currently used. And since they are cheap, there could be many of them. With a pad, it has to do many tasks. A casual display would do only one. You could have them all over the place, as recipe cards, photos, pieces of art, maps, books, body adornment, playing cards, messages, birthday cards, instructions, medical advice, or anything. For example: 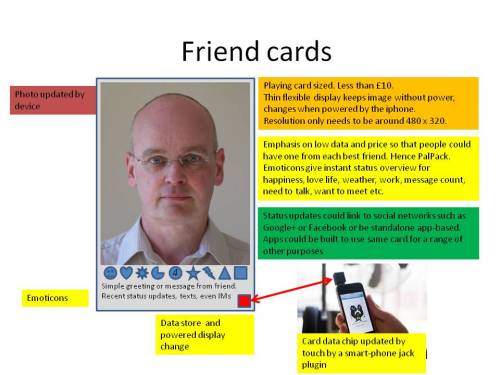 Friend cards could act as a pin-board reminder of a friend, or sit in a wallet or handbag. You might have one for each of several best friends. A touch of the spot would update the card with the latest photo or status from Facebook or another social site. Or it could be done via a smart phone jack. But since the card only has simple functionality  it would stay cheap. It does nothing that can’t also be done by a smartphone or pad, but the point is that it doesn’t have to. It is always the friend card. The image would stay. It doesn’t need anything to be clicked or charged up. It only needs power momentarily to change the picture.

There are displays that can hold pictures without power that are postcard sized, for less than £10. Adding a simple data storage chip and drivers shouldn’t add significantly to cost. So this idea should be perfectly feasible. We should be able to have lots of casual displays all over our houses and offices if they don’t have to do numerous other things. In the case of displays, less may mean more.